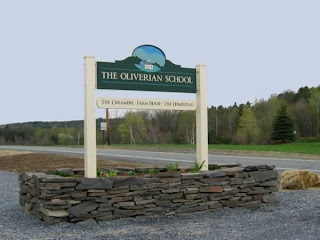 The Oliverian School is a college preparatory boarding and day school located in Haverill, New Hampshire. This past week, we visited the school and meet with the Director of Admission and Headmaster Emeritus, Barclay Mac Kinnon Jr, who has always been a part of the schools ongoing development.

Barclay spoke to me, as well as other consultants, on the tour, about the mission and the extensive development growth of the school over the past 10 years. There has been several changes which have occured, including: finding the construction of several new building in the staff with the addition of the admisions director, Carl Lovejoy is the current admissions director, replacing Barclay, who was performing both roles as headmaster and admissions director.

Barclay is now Emeritus headmaster moving his position to an honorable position, than direct headmaster. While he admits, " its taken some time to know mission of the school", he also acknowledges his role the made changes from being a therapeutic school to a college prepatory program. This change has taken time, and much decidication, based on their student population and the feedback from consultant and parents.

Many boarding schools are located in New Hampshire, having college preparatory program, however Oliverian is unique in its "pedalogy". The mission, similar to other college prepf schools has a curriculum matching these schools, but its student's are sometimes more academically challenged. The very practical learning focused on life science and experimentation, its clearly a school for a student who is wanting to experience life skills application, but its focus is on college preparatory admission.

The nature beauty of the school is cascade by its very lovely enviroment, which is green friendly and shares with students how to care for others, besides themselves. This experience includes: a creamery, livestock for caring for and a extensive horticulture program.

Staff at Oliverian are very enviromentally friendly too! The most interesting piece in the school mission, is its ability to challenge students grades 9 through 12 and will accept students in upper grades. A traditional boarding school would not allow admission in the 12th grade in general. This not the case for Oliverian.

The school offers snow skiing, snow boarding, and typical winter sports, while offering different activities in the summer like softball and soccer. Students come from all over the world. There are student from the states, at least 20 different states are included. These students may be underachievers, or they might be middle or moderately underachievers. The more capable of achieving in the school the more sucessful the student might be.

The enviromental science for example is a learning lab. We might consider these students otherwise not be admitted at traditional boarding school, but probably in a therapeutic school placement.

The curriculum is similar to a traditional boarding school, but there are not the pressure of having a regular boarding school. The program offfers sucess but under different circumstances. The residental treatment program component is not really noticeable, becaue it looks like a therapeutic school and not a boarding school.

Several consultants including myself met with the school last week to hear about the changes at Oliverian. During our fourth day of touring several school in Massachuttes, Vermont, and New Hampshire were also involved in the tour. Consultants from Canada. Washington DC and Bermuda, Massachutes, and Vermont were in attendance.


We had a very nice lunch after touring several of the new contruction ares of the campus, The campus renovations included: the fine arts building, the girls housing, the boys housing the library, along with the housing for staff located in over 1,400 acres of land with a natural pond used for ice skating in the winter and swimming in the summer. The program also has a summer program with less the amount of students.


The maticulation to colleges at Oliveran seem very sucessful with many going on to local colleges after Oliverian. The faculty provides direction for students in college admissions helping all students find direction in testing, having AP courses as well as tutoring. We had lunch with all the staff and they answered all of our questions regarding the sucess and challenges of the school. The school does have a very academic center, art and music studio, organic gardens, forestry barn and horse stable, including a riding area. The counseling and fitness center is also an addition to the program. The school has a live stock barn with many animals used by the school.


This type of approach to learning is a perfect fit for students both a residental treatment and therapeutic boarding school setting. The school also has a academic preparness which is helpful. A creamary is on campus where they produce dairy products, and teach recycling, as well as enviroment science. the admission office is at the front of the housing and classroom areas.

"Our goals of the program is to teach individual skills for independence, "not baby sitting", according to the new admissions director, Carl Lovejoy. The Center for School Sucess is a model used at Oliverian to help move them to sucess. Individuals hired by the school are specifically choosen based on their capability to carry out the missin of the school as well as the model of the Center for School Sucess, adopted by Darmouth College, which is directed to helping student achieve sucess.

We found. while there are certainly no perfect students at Oliverian. Many students do come from wilderness progams before coming to Oliverian. The school is less restrictive in rules and expectations are simply to help student achieve sucess and being responsible. Barclays says: " if a student does not want to be here, they can leave". "We do not believe in making kids come to here, nor do we want them here if they don't want to be here". At Oliverian, we simply want our students to want to be here". The most interesting part of coming to Oliverian is their sucess rate. The campus is absoutely beautiful, simple natural, very much like living in a home setting, but very nuturing, to students.

A student who might be choosen to come to Oliverian might a student not as sucessful in a restricted residental treatment program. The student certainly need to be somewhat mature, but has direction in being more accoutable, and enjoys being in the outdoors. A student who might want to study enviromental science is a perfect fit. A student is very oppositional is not a good fit simply because its very difficult to control a student in this enviroment.

A student needing nurturing and support by staff is a good fit. We believe the cost to be quite reasonable at about 55,000 (fifity five thousand dollars). The price is just about 10 (ten thousand dollars compared to a traditional boarding school. The dorms are very simple, but comfortable. No frills but the larger part is the schools very large campus with the number of students enrolled in the program from other programs.

The current enrollment was a bit past 50 students and this was apparently a comfortable number for the staff to have a clear mission of addressing the need of the student individually. A consultant would look at this school as a in betwen placement or step up program. This is not a step down program where a student would be placed before wilderness, it is a good school for a step up program after wilderness.

There was over 90,000 dollars of financial aid awarded during the year at Oliverian to students and this is quite impressive. The school was inital on the ground of a public school for students with special needs, having made several changes over the years.

Family therapy is frequent, with the students and their parents, who even have the opportunity to have contact with the staff with home visits. We found a significant availability of services with a good staff to student ratio of the school . There is a chef on campus to provide good meals and students do work at the school in many capacities. Barclay recently hired a new assistant to admission who is very familar with traditional boarding and worked a several traditional schools before coming to Oliverian.

We believe a student who wants to thrive in a therapeutic boarding school prepatory school will do well at Oliverian. Students with a significant problem with substance abuse, challenges with behavior so restrictive to need a more supervised setting will not do well at Oliverian. We found the staff supportive and creative. The application is on line or can be provided by the educational consultant.
Posted by educationalplanningandcounselingservices at 10:25 PM